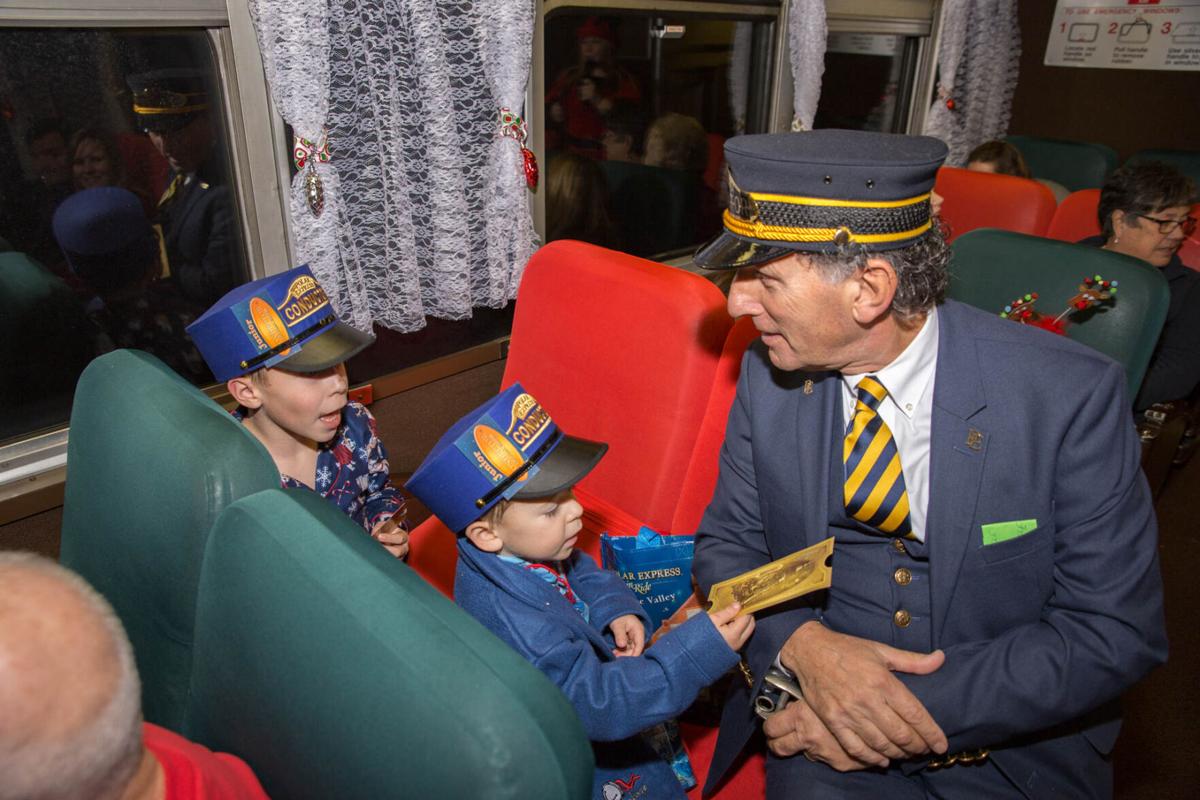 Conductor Bob Billington gathers tickets from junior conductors during a previous year’s ride on the Blackstone Valley Polar Express. The annual event is back on this year after being canceled in 2020 because of the pandemic. 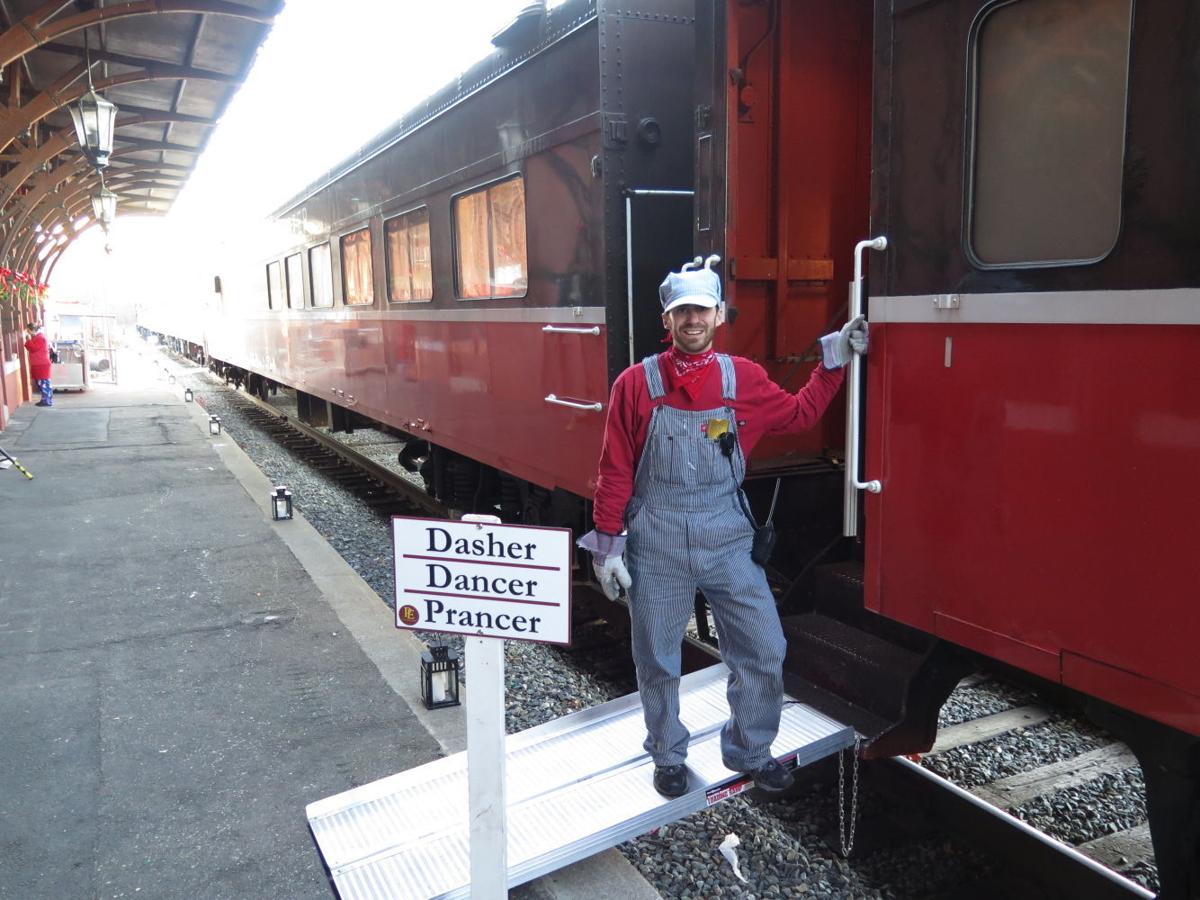 Matt Dube, of Pawtucket, is a train man on the popular Polar Express run, which made its last trip of the season out of Woonsocket’s Train Depot on Sunday.

WOONSOCKET – As the cold weather arrives, municipal holiday traditions return. Tickets are on sale now for the Blackstone Valley Tourism Council’s Polar Express Train Ride after a year of absence due to COVID-19.

According to Head of the Blackstone Valley Tourism Council who plays the train’s conductor Bob Billington, this year’s event introduces a new pre-luding show scripted by Warner Brothers, put together and performed by The Voice’s Emily Luther, Mount Saint Charles Academy Creative Director John Guevremont, and some of the academy’s students.

The show will begin 30 minutes before each train ride and will span approximately 10 minutes, according to Billington.

Customers of the event are to arrive at the Woonsocket train station located at 1 Depot Square to view the performance and board the train, according to Billington.

As a COVID-19 precaution, all pre-boarding events will take place in a tent outside of the train station, with the only inside event being the photographs with Santa Claus following the train ride, according to Billington.

Masks will be required at all times during the duration of the event, with the exclusion of consumption of the traditional Polar Express cookie and hot chocolate, according to Billington.

This year’s cookie will have a new, special Polar Express design and will come to customers pre-packaged, according to Billington. All items given to customers will be provided in a Polar Express themed stocking to limit customer-staff interactions, including the customary golden ticket.

The train’s doors will be opened temporarily every 15 minutes to allow ventilation during the 90-minute runtime, according to Billington.

The Council has hired a company to clean all of the train’s touchable surfaces with the same cleaner used to sterilize medical and safety vehicles, according to Billington.

“We’ve thought hard about how to present the Polar Express to the guests that come in, in the safest, enjoyable way possible,” he said.

Pre-boarding events will also include perusal of the Polar Express gift shop, photo opportunities with the book’s characters in front of custom-made themed backdrops, and other children’s activities, including writing letters to Santa Claus, according to the event’s press release.

The train ride will include its typical reading of Chris Van Allsburg’s Polar Express book along with sing-alongs and games, according to the press release. The train will take customers to the “North Pole” where a live dance performance by The Dance Step as elves will take place. Children will also receive the “first gift of Christmas” – a silver sleigh bell.

The event will be held on weekends from Nov. 19 to Dec. 19. This year only 4 p.m. and 7 p.m. trips will take place, according to Billington. Ticket prices remain the same from 2019.

Customers have the choice of tickets for First-Class Cars – Cupid, Comet, and Rudolph – or Premium Cars – Dasher, Dancer, and Prancer. However, Prancer table seats are sold out for the year and few pairs of tickets remain for the Premium Cars, according to the event’s official website.

For more information and to purchase tickets visit the event’s website blackstonevalleypolarexpress.com.

The event was originally inspired by a Polar Express book reading event that took place in New Hampshire, Billington said. The Council then adopted their own version of the event following negotiations with Van Allsburg and the book’s publisher Houghton Mifflin.

He said at the time the Council was using the train for historic tours and with Van Allsburg being a local author, living in Providence, Rhode Island, he thought, “We have the train. We should be reading this book on the train.”

Billington added when the movie came out, the Council had to negotiate a contract with Warner Brothers to ensure they could continue hosting the event. The movie increased the event’s popularity with similar attractions showing up across the country and even across the globe.

Twenty-two years later, the Blackstone Valley Tourism Council Polar Express Train Ride remains as the oldest event like it in the world, he said.

“We pay a very steep royalty for the rights to read that book on board the train because now it is highly valued intellectual property,” he added. “But we developed the program our way.”

Having brought in 23,000 people for its 2019 event, the Polar Express Train Ride is one of the Council’s largest sources of revenue, Billington said, adding, the Council only expects approximately 15,000 people to attend this year’s event.

He said bringing in a large number of people year after year to Main Street, Woonsocket is the best part of the event for him because that means the city is not “foreign” to them.

People from all over come to Woonsocket for this event and participate in other aspects of the city, including eating locally, attending the museum, and staying at local lodgings, Billington said.

“It really is part of our DNA now,” he said about the event, comparing its importance to Woonsocket’s annual AutumnFest. If AutumnFest does not happen, “it’s not a very good feeling because it’s in the DNA of the city now, and Polar Express is that way for us.”

He said 27 years ago the Council took on the responsibility of purchasing the boat in an effort to “get people out on the Blackstone as a group,” adding the Council’s main function is to “educate people about the Blackstone Valley.”

He explained the boat allows for collective lessons and tours to take place regarding the river, the environment, and related science education.

The boat requires steep expenses in order to maintain it and the Council has yet to make a profit off of it, Billington said.

Last year due to COVID-19 precautions, only 15 people were allowed at a time on the Explorer, which typically seats 40 passengers, he added.

Another project is currently underway titled The Blackstone River Science Classroom, which the Polar Express Train Ride revenue will help fund, he said, adding it’s “something that we’ve been trying to do for many, many years.”

Billington said, “We’re happy with the cooperation and the collaboration” of the City of Woonsocket, the mayor, and the community, including Mount Saint Charles Academy, The Dance Step, and the family who allows the Council to house the North Pole on their land, in putting together this event.

He added, “The more we can get the community involved, people involved, revenue flowing around these activities – the better we like it.”