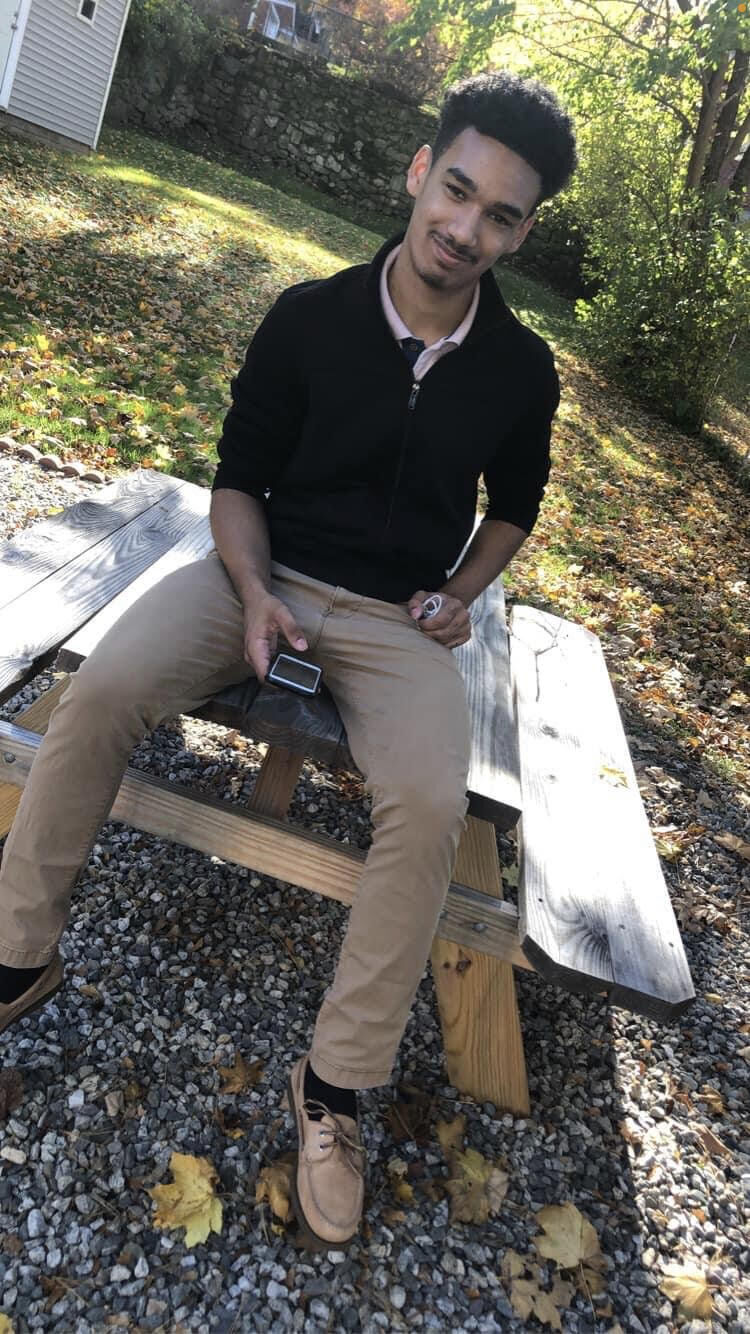 Lincoln native and aspiring musician Cliffton Dubois was 19 years old when he died due to complications from a drug overdose last month at Landmark Hospital. Cliffton’s rare blood type made it possible for his donated organs to immediately save three people. His mother, Jennifer, says that’s the kind of legacy her son would have wanted. ‘He couldn’t help himself, but he made sure he helped everybody else,’ Jennifer said.

Pictured below, from left, Cliffton and Jennifer Dubois, and Cliffton's younger brother, Rashard, in a family portrait.

Lincoln native and aspiring musician Cliffton Dubois was 19 years old when he died due to complications from a drug overdose last month at Landmark Hospital. Cliffton’s rare blood type made it possible for his donated organs to immediately save three people. His mother, Jennifer, says that’s the kind of legacy her son would have wanted. ‘He couldn’t help himself, but he made sure he helped everybody else,’ Jennifer said.

Pictured below, from left, Cliffton and Jennifer Dubois, and Cliffton's younger brother, Rashard, in a family portrait.

Her memories will be bolstered by the knowledge that, while Cliffton died on April 23, his caring way continued through a rare opportunity to help others despite his tragic loss – the gift of life through organ donation.

“My son wanted to help everybody,” Dubois said recently after a visit to Landmark Medical Center, where he was treated for his overdose and where his donations were made.

Cliffton’s death came after a long struggle with substance abuse and many attempts to turn his life around, his mother said.

“He couldn’t help himself, but he made sure he helped everybody else,” Dubois said. “He made an impression everywhere he went.”

Cliffton was passionate about music, writing and recording his own songs and hip-hop tracks and posting them as videos online. Some included messages meant for his mom, telling her that he knew what he needed to do and that he was trying to achieve that change.

The person he was made Cliffton’s gifts of life through organ donation the right choice for his legacy, his mother explained.

“Cliff was a very caring and gentle, forgiving and just amazing young man,” his mom said. “He was so talented and intelligent.”

At 19, however, it’s hard to grasp the risks that come with one’s choices. Sometimes young people feel invincible even though they’re not.

Dubois said her son had gone into assistance programs while he was a ninth grader in Lincoln schools. He eventually earned his GED and wanted to attend CCRI for a degree in mechanics, according to his mother.

That got put on hold when he started to write songs and record, a pursuit that got him a following of friends and other performers.

“He was extremely tech-savvy and he wrote and produced everything he made and performed. It was his way of expressing himself,” Dubois said. “I would say ‘that’s just a hobby, you need to get work,’ but thank God he did that, because now I have his songs. Who would have thought that?”

Dubois’s journey through a mother’s saddest moments began with a call as she was finishing a morning of work as an EEG (electroencephalography) technician for a pediatric neurologist practice in Cumberland.

Cliffton had arrived home at his Aunt Sharon Hill’s home in Woonsocket, where he had been staying after being out the night of April 16.

He was talking to everyone, and laughing, and telling people he loved them, Sharon’s Hill’s son Keith Hill, who lives with his mom and his girlfriend, Kelsey Rose, recalled last week.

Cliffton went to sleep in the living room, and it is believed that he took an opioid prescription pill – a Percocet – at some point in the night.

His mother said the pill was laced with fentanyl, a common risk to people struggling with substance abuse that can lead to deadly overdoses.

It is a risk that keeps their family members in fear of the call that Dubois received that Saturday morning.

“We found him in the morning and I had to give him CPR, the ambulance guided me over the phone on how to do it,” Keith Hill said.

His mother also helped with the lifesaving attempt, and soon Woonsocket Rescue personnel were at the home, fighting to revive Cliffton with repeated doses of narcan, a medication that can reverse the effects of opioids, and more CPR and breathing assistance.

Dubois got the call from Cliffton’s aunt, who was hysterical after trying to save him. She was immediately hurried to Woonsocket knowing only that he was unconscious.

Cliffton was taken inside Landmark Medical Center emergency department and his rescuers were able to get his pulse back.

At that point, the question became what would happen next.

As an EEG technician, Dubois knows that the test of a person’s brain wave activity can determine a patient’s outlook after an incident like Cliffton’s. And there are other tests that tell doctors how the patient’s major organs are functioning and help them to determine an overall prognosis.

“At first, I swore he was going to wake up. But every day we did more and more tests, and he declined every day,” Dubois said. “I had three different neurologists coming to do the tests and the doctors were amazing. They were so compassionate and they took the time to repeat every test.”

“If they had told me that my son had a 1 percent chance of recovering, I would have taken it and prayed on that chance,” Dubois said.

But that was not in the cards for Cliffton. He had indicated he wanted to be a donor if something happened, and Dubois made the decision early on that if he did not improve, that would be the path they followed.

“Wednesday was the final test, and that was when he was declared 100 percent legally brain dead at 3:45 p.m.,” Dubois said.

Dubois knew it was time by that point.

“I knew he wasn’t going to be able to sustain life on his own; I knew once the machines were turned off, he would die,” Dubois said. “I thought, I just want a parent to be able to answer the phone and get the call that their loved one would be saved and they wouldn’t have to feel what I am feeling, losing my son.”

“If he could help save a loved one, and save a family from experiencing the tragedy of losing somebody, we have to do it,” Dubois said. “And I just knew a part of my son would be living on in someone else.”

In the parking lot across Cass Avenue from Landmark, Cliffton’s family and friends had kept a quiet vigil over the days he was hospitalized, talking in small groups and lighting candles around a utility pole where they posted memories and tributes to him.

Members of the Woonsocket Fire Department, who had fought for Dubois’ life, also stopped by at times during the vigil.

Dubois and Cliffton’s brother, Rashard, 16, were keeping their own vigil inside the hospital with their loved one.

“I wasn’t out there, but from what I know, his friends and family came out to remember him, to reminisce together, and to respect him,” Dubois said. “I was overwhelmed with a lot of emotion to know how many people loved my son.”

Keith Hill and Kelsey Rose were at the lot after Cliffton’s donations to others had begun. They had smiles thinking about him, his way, and his music.

“Cliffton has one of the rarest blood types, AB negative, and a lot of people he is giving his organs to – they wouldn’t have had the chance,” Hill said. “They have been waiting years and Cliffton is a perfect match. I’m very happy about that.”

The couple said the vigil began on the Monday after Cliffton arrived at the hospital, just to show support for him and his family.

“There is nothing here but love,” Hill added.

“It gave me comfort during this horrible time, that some good was going to come of this, and that people were going to live or be helped because of my son,” Dubois said. “That gave me peace.”

Dubois said her son was able to donate organs and tissues to help three other people immediately.

His heart couldn’t be donated intact, but his heart valves and heart blood vessels went to others – as did the corneas of his eyes, Dubois said.

Even with today’s awareness and technology, donations remain a rare gift to those in need, according to Dubois.

“Out of 1,000 people who sign up to donate, only 3 people will be able to, just because of the circumstances involved,” she noted.

For Cliffton, the opportunity meant a way to turn sadness into hope, according to his mother.

“I mean, what greater honor in this lifetime is there but to give the gift of life?” Dubois said. “There’s no greater accomplishment you can have but to save someone’s life. That is amazing.”

“It is things like that that I am holding onto to get out of bed every day, to learn how to accept and embrace my son’s passing,” she added.

Cliffton’s life came to a close with a “hero walk” observed by Landmark’s staff on Friday, April 23, as his mother went with him to the OR.

“And they played the song that he loved over the loud speakers through the entire hospital. John Denver, Country Roads, would you believe it,” Dubois said. “I held on to his bed as well and we walked down the hall together and we walked to the OR, where he departed me. It was the last time I had my son.”

Dubois had praise for Landmark’s staff for how it helped her family.

“I honestly can’t say enough about the staff, their accommodations, and their sympathy and their empathy,” Dubois said. “Not only were they taking such good care of him, they were loving him as they were doing it. They did everything with love.”

The whole process of making gifts of life, the respect and love shown Cliffton, the hero walk – it all added up to something of value, according to Dubois.

“Knowing that you saved people, it does give you some peace, or something to focus on other than the grief,” she said. “I’m going to grieve the rest of my life my life, but I’ve got to fight for something good out of this.”

More information on organ and tissue donation is available by contacting New England Donor Services at 1-800-446-6362.