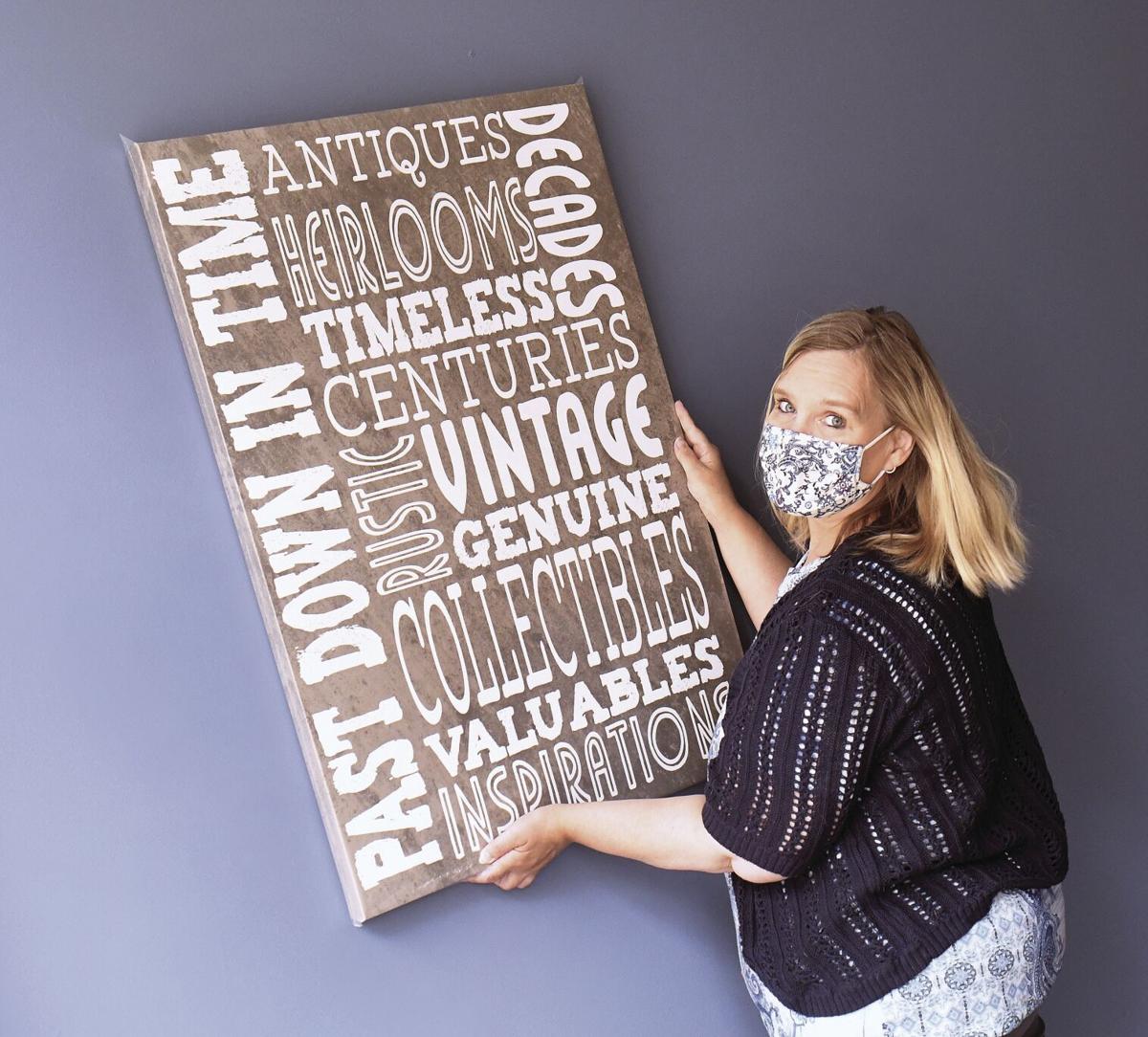 Cindy Thibodeau of Woonsocket hangs a sign in her new space on Main Street, home to her new storefront business called “Past Down in Time," an antiques and collectibles store located at 154 Main St., Suite 1, in Woonsocket. The shop will open on May 15. 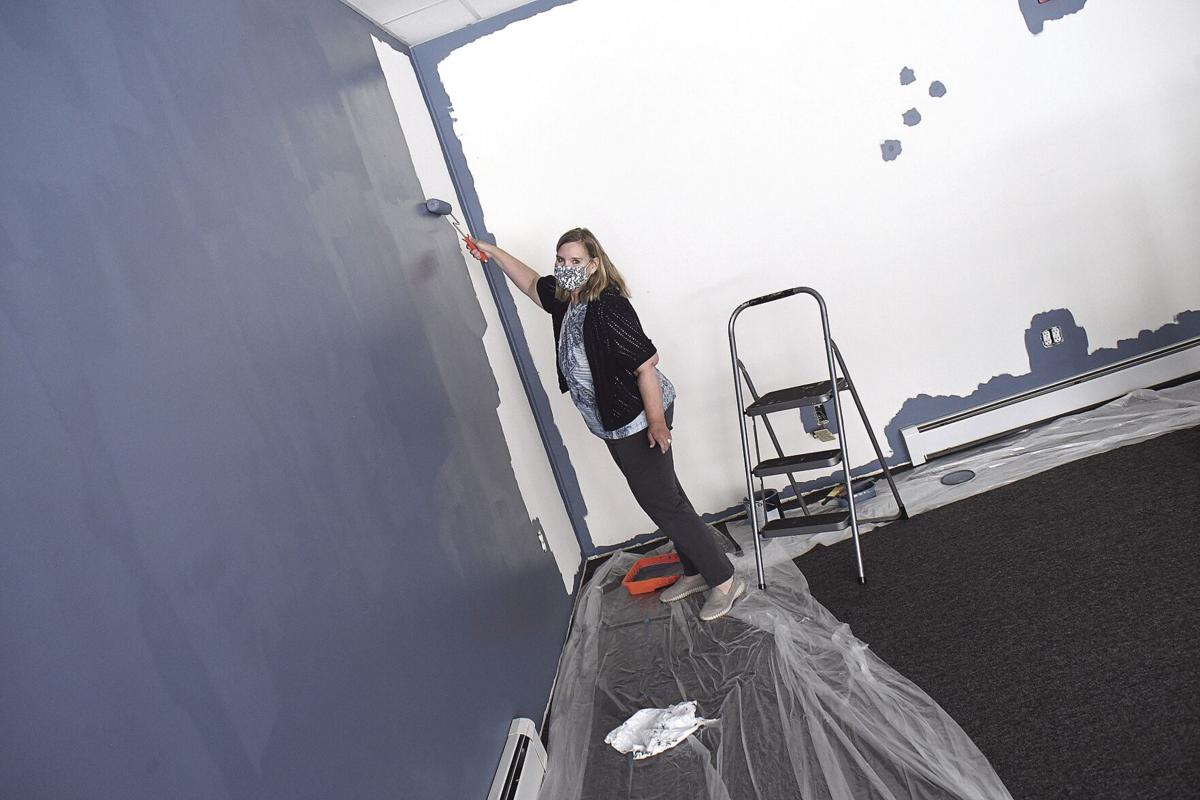 Cindy Thibodeau of Woonsocket is busy painting the walls of her new storefront in Retro Colonial Blue on Wednesday. The store, located at 154 Main St., Suite 1, will sell antiques and collectibles. It will be called “Past Down in Time."

Cindy Thibodeau of Woonsocket hangs a sign in her new space on Main Street, home to her new storefront business called “Past Down in Time," an antiques and collectibles store located at 154 Main St., Suite 1, in Woonsocket. The shop will open on May 15.

Cindy Thibodeau of Woonsocket is busy painting the walls of her new storefront in Retro Colonial Blue on Wednesday. The store, located at 154 Main St., Suite 1, will sell antiques and collectibles. It will be called “Past Down in Time."

WOONSOCKET — Among some members of the City Council, there was a time in the not-too-distant past when an application for a license to sell secondhand merchandise on Main Street invoked unpleasant images of stores cluttered with dented cookware, threadbare sofas and hand-me-down toys.

At one point, Councilman Roger G. Jalette Sr. went as far as invoking a self-imposed moratorium on approving licenses to stanch the proliferation of what he called “junk stores” on Main Street.

But Jalette did an about-face Monday when Cindy Thibodeau applied for one of the permits to open a new business, “Past Down in Time,” in the Liberty Building, across the street from City Hall. After a presentation by Thibodeau and Garrett Mancieri, director of the Downtown Woonsocket Collaborative, Jalette lifted his personal ban on the permits, and made a point of explaining why when he cast his vote – along with every other member of the council – in favor of the new antiques and collectibles business.

“When we saw the people who want to put the business there, in the background if you noticed there was some nice merchandise on the wall,” Jalette said during the Zoom meeting. “It looked like stuff that might be in the store and it kind of impressed me, so I will take the chance there is not going to be any junk in the store.”

He added, “Former Councilman Mancieri says he likes them, so I’ll take a chance on it.”

Past Down in Time will become downtown’s second antique shop, said Mancieri, and like its predecessor, Timeless Antiques, it’s the real deal.

“We wanted to make it clear to the council it’s not going to be a junk shop,” said Mancieri. “It’s going to be classy and chic.”

Mancieri says the arrival of Thibodeau’s store puts DWC planning group a step closer to establishing Main Street as a destination for antique-hunters, a strategy other cities and towns in the region have used to pump new life into their downtowns. Perhaps the best-known example is Putnam, Connecticut, but closer to home, Glocester has also done a laudable job of attracting visitors with an eclectic assortment of antiques and collectibles stores.

Mancieri says he’s not necessarily shooting to replicate the intensity of the Putnam model for the city’s downtown, but three or four reputable antiques vendors here would be plenty to convince enthusiasts to make a day trip to the city to peruse vintage merchandise, dine and perhaps see a show at the Stadium Theatre. Ultimately, says Mancieri, the rejuvenation of Main Street may depend on contributions from a mix of sectors, including restaurants and the arts.

“I don’t anticipate we’re going to have as many as they do, but we’re trying to get a few more of those shops here in downtown Woonsocket,” Mancieri said.

Mancieri says the owners of Timeless Antiques, Tammy and Frank Irwin, have extended a warm welcome to Past Down in Time. He says it’s possible the two stores might team up for promotional events that could benefit both of their businesses.

A Missouri native, Thibodeau lives on Gauthier Drive – a street that’s having a very impressive run these days in terms of churning out the city’s newest small business entrepreneurs. Thibodeau and her husband Frank live a few steps away from Geraldine Barclay-King and Gloria Ayotte, both of whom also have Gauthier Drive addresses. Barclay-King recently opened the African apparel store Geri’s Bluffing Boutique, which is operating locations at 285 Main St. and 40 South Main St., and Ayotte launched Interiors By Glo, an interior decorating business, at 275 Social St., just a few weeks ago.

In a phone interview, Thibodeau said she hails from a long line of antique collectors and became one herself.

“There’s about five generations of antiques that I know I have,” she said. “They’re genuine. It’s not junk.”

Her application to the council says the store will carry vintage goods, primitives and “country farmhouse style items.” Thibodeau says she also has Civil War memorabilia, antique furniture, photographs and other items.

Though she grew up in Missouri and still has family there, Thibodeau had been living in Massachusetts until a few years ago when she and her husband moved to Rhode Island to be closer to family. Around 2017, they were looking for a new house and stumbled across a nice cul-de-sac in Woonsocket and “fell in love with the area.”

One family member from Missouri was an uncle who died in October after a brief battle with COVID-19. Thibodeau said his untimely death at age 68 resulted in her inheriting a collection of Civil War-era daguerreotypes and other photographs, some of which will be on display at Past Down in Time and available for sale. She also has a few unique items from the Midwest that aren’t often seen in East Coast antiques stores, like folding wooden rocking chairs.

Although she has a degree in English and creative writing, Thibodeau is a graduate of the Asheford Institute for Antiques, which offers accredited programs for those seeking careers in related fields, like auctioneers, appraisers and estate liquidators.

Thibodeau spent some three decades working in private industry, most recently as an administration manager for LichtGarner, an Attleboro precious metals supplier that has contracts with the U.S. Mint, but she’d long dreamed of opening her own antique store. With an ongoing career, she felt like her hands were too full to start her own business, a situation that changed dramatically when she was unexpectedly laid off in January.

That’s when Thibodeau decided to “just go for it.”

“I’m excited because this is something I’ve always wanted to do and now I have the time to do it,” she says.

Thibodeau was in the new store, located at 154 Main St., doing some painting this week before making a trip to Missouri to retrieve some of her belongings. She anticipates opening the doors in the mid-May.